Trying to point out a bird to just one other person can be hard enough. Add a few dozen people and the difficulty increases. When that bird is a distant gull standing in a sea of other nearly identical gulls and you are the only one who has seen it…well, it can be almost impossible.

That’s the situation I found myself in last week on a Thursday birder trip to the Alameda Bridge and Open Space in northern Albuquerque. Hundreds of Ring-billed Gulls loaf on sandbars in the Rio Grande north and south of the bridge and at times the large flock contains individuals of rarer species. This winter, single birds of four unusual species have been found: immature Thayer’s Gull, adult Mew Gull, adult Franklin’s Gull, and adult California Gull. The first two wandered here from the Pacific coast; the last two are expected in migration, but unusual in winter. Even more unusual is that the Franklin’s Gull is in full breeding plumage. 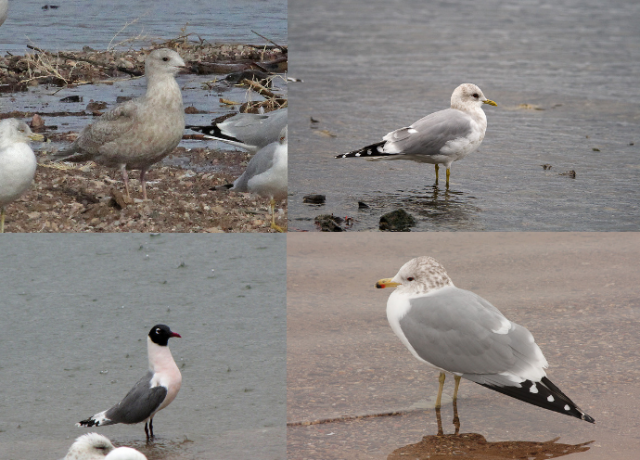 When the gull flock rests south of the bridge, birders can search for the rare species from a fairly close distance only a short stroll from the parking lot. But if the flock is north of the bridge, a scope is essential for even decent views from the bridge itself or the east side of the river. Birders willing to put in more effort can walk over the bridge and then north through the bosque on the Corrales side of the river, although there are no official trails to follow along the river banks. 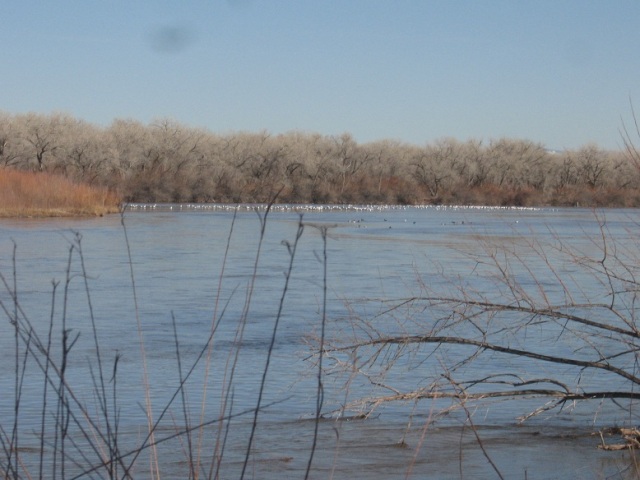 The gull flock last Thursday. The Mew Gull is eight gulls in from the right!

Close to 40 birders joined the trip last week–a huge number for one of these outings. The group ended up spread out along the riverbank trail trying to get direct views of the flock of gulls. I hadn’t brought my scope along due to some missing screws in the tripod legs, but I eventually scanned the flock through another birder’s scope. One gull caught my eye: it seemed to lack a black ring on the bill, but it wouldn’t stop preening. Some other birders took a peek and saw which bird I was looking at. Now the task of trying to describe where it was to everyone else. Wait, no, the bigger metal jetty jack beam. On the near edge of the flock, oh wait, it walked away from us behind two other gulls. Because of the angle between us and the edge of the flock, there was enough parallax between one end of the group and the other that describing the position of the Mew Gull only worked for each scope.

I think most birders in the group who wanted to get a look at the gull were able to. Gulls aren’t for everyone, and when the views aren’t that great and the bird doesn’t look much different from the gulls on either side of it, many birders can lose interest, understandably. Later in the trip, I offered to lead any who wanted a better look at the gull along the west side of the river. Eight of us walked north through the now very open bosque (most plants except for willows and cottonwoods have been bulldozed away). About half of the gulls had flown south, so there was no guarantee we’d get that better look. Luck was with us, and we found it! Even though we were closer, we sill had trouble picking it out as it walked and swam among the Ring-billed Gulls. From the new angle, depending on the lighting, the darker mantle color was clear.

This may not be the worst Mew Gull photo ever, but it’s close.

Success! My side trip paid off. The Mew Gull was a life bird for many in the group.

One birder on the trip was visiting from Massachusetts and was eager to see Cackling Geese. I ran into him later at the Rio Grande Nature Center where we had a short conversation about what exactly a Cackling Goose was and what all those tiny geese on the pond were. This topic will make a great next blog post, and one that I hope will shift the focus of my blog from merely local bird sightings to a more scientific look at the birds we see around us.