Over my holiday travels, I kept up on the bird news from New Mexico. On December 20th, two to four Rusty Blackbirds were found in the bosque southwest of the Albuquerque Zoo. Over the next two weeks, up to two Winter Wrens and a Pacific Wren were found nearby in a great example of the Patagonia Picnic Table Effect.

Just before New Year’s, one or two Thayer’s Gulls appeared in the winter Ring-billed Gull flock at the Alameda bridge. Would all these birds stick around until I got back?

I wasn’t sure if I’d be able to get out birding at all this week because Melissa and I adopted a 7 month old cat two days ago. I didn’t want to make him feel abandoned or get into trouble when he was alone, but it seemed like he’d be ok the next morning. He got very comfortable with us and his new home very quickly. 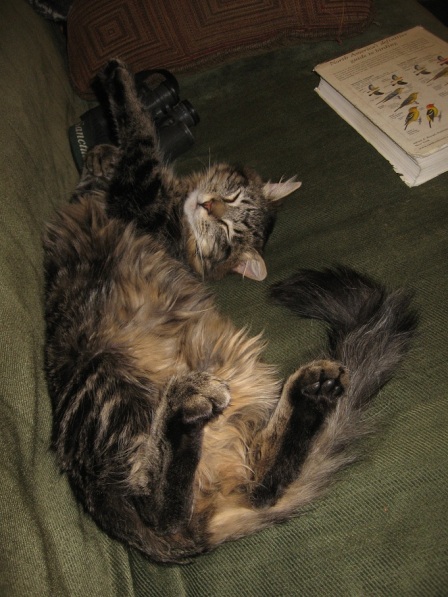 Meet Donut, who is already dreaming of catching birds. He can only dream, literally.

Joe and I met at the Alameda Bridge to look for the gull. The Ring-billed Gull flock was in their usual spot on the sandbars about 350 meters north of the bridge. Too far away to see any details well, but there was a larger gull standing in the flock. This was a good sign! It seemed fairly light for a 1st cycle bird (juvenile to 1st winter plumage) and the primaries weren’t a dark black.

Wanting a better look, we walked north a bit along the west side of the river to get a closer look at the flock. (We actually stood in Sandoval County but looked into Bernalillo. This is the kind of arbitrary boundary issue that keeps hard-core county listers up at night.) On our way, we noticed a sign warning against entry. 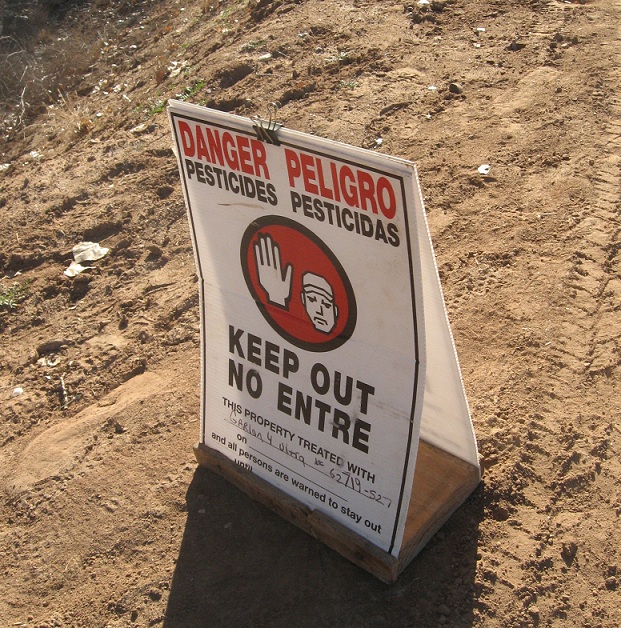 Garlon 4 Ultra, a pesticide for the control of woody plants and herbs. It can cause birth defects, kidney and liver damage, and blood disorders. This is a commonly used pesticide.

Was the danger worth a better view of a life bird especially if it’s just a gull? We didn’t go down the trail where this sign was, but we found more efforts at de-vegetating the bosque. 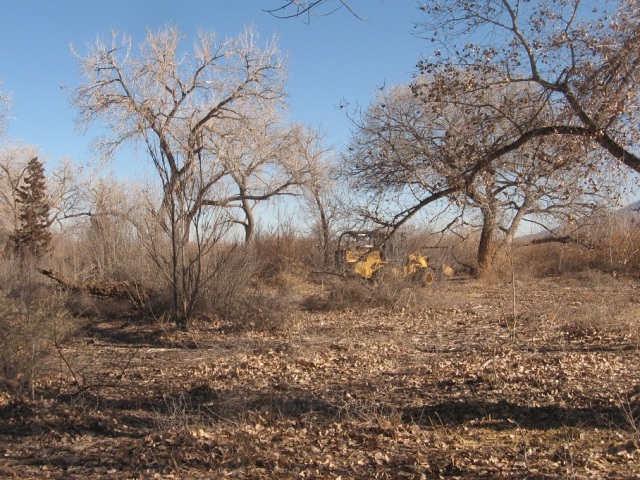 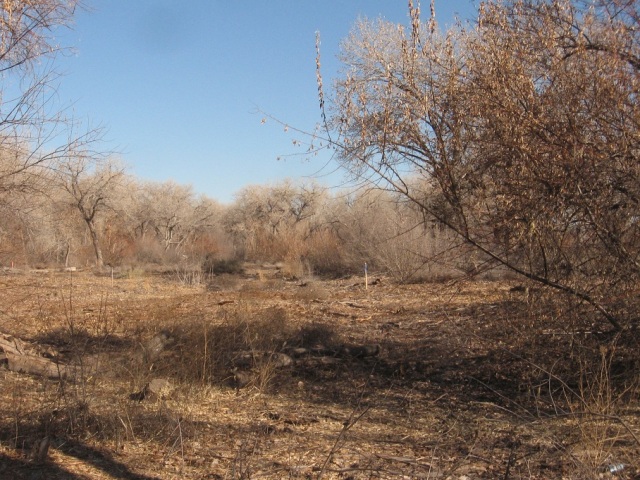 Corrales seems to be trying to remove the non-native Russian olives and salt cedars that have taken over river banks throughout the Southwest. They plan to replace the vegetation with willows for a more natural habitat. There is a downside (besides the destruction of all vegetation by bulldozer and pesticide): the Russian olives, at least, provide great cover and food for wintering birds. Species like thrushes (a Varied Thrush spent time in the thickets in Corrales last year) surely did ok before the invasive plants. Do they rely on the olives for winter cover and food now? What are the costs now, and how can we make sure the populations recover if they are harmed by the removal? Some birders don’t see the bigger picture. In Port Aransas, Texas, invasive peppertrees have run rampant, but come to provide a crucial resource for trans-Gulf migrants reaching land. The birds spread peppertree seeds to the detriment of habitats all around the Gulf. They should be eliminated, right? Ted Lee Eubanks at the ABA blog mentions some birders’ complaints that the trees should remain because they attract birds. There’s more to the natural world than birds, but the long-term effects of any influence by humans is a tough question.

Enough digression. We avoided the bulldozer and the pesticide (we hope) and were able to get within 30 meters of the gulls. The closer look confirmed our suspicions. It was probably a Thayer’s Gull (a life bird and #308 for New Mexico, 230 for Bernalillo County). Why do I say probably? Thayer’s and Iceland Gulls hybridize regularly and share many of the same genes. They are hard to tell apart and a light Thayer’s and a dark Iceland could be nearly identical. Thayer’s is more likely, but going on likelihood, however reasonable, can open up a can of worms. Thayer’s Gull may not be a “good” species, but the end of a continuum of genes (a cline) from western Canada to Europe where “good” Iceland Gulls breed. Most of the world apart from the AOU has already lumped the species together. Joe offered to show me where the blackbirds and wrens were seen south of the Tingley bosque ponds. We parked at the secret entrance and walked towards the river. At the first patch of unfrozen water on the river floodplain, we looked up and there was the pair of Rusty Blackbirds! (another new bird for the state and county.) We almost walked right under them. 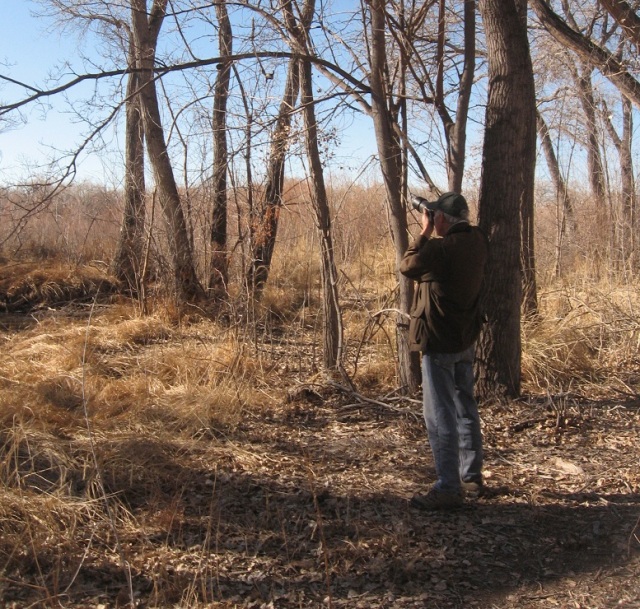 Joe and one of the blackbirds. Follow his camera lens to the black blob to the left of a clump of leaves.

The pair acted very tame and fed in the mud no more than 2 meters from us. We never saw them eat anything, but they spent a lot of effort flipping over wet leaves in the mud. 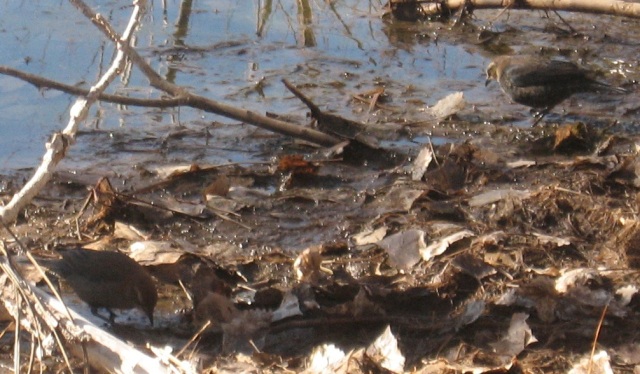 The Rusty Blackbirds. See some better photos by Joe at his photo site.

Finding the wrens was a bit harder. Things were quiet at the usual floodplain pond where they’d often been seen, other than a very bemused Cooper’s Hawk sitting in the water (taken by Joe). A few wren-like chips, unlike a Winter Wren, came from the edge of the pond, then went silent. A short walk back north prompted more agitated chipping, and then there it was! A Pacific Wren sitting high on a dead stump, scolding us for walking by. Oddly, it gave only single chips rather than the usual double. That wren brought me to 310 for the state and 232 for the county! 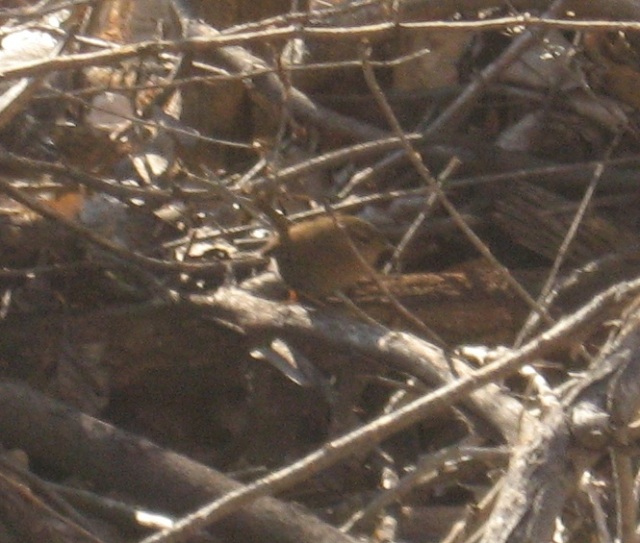 Pacific Wren. At least it turned out better than my last attempt at a picture of a stub-tailed wren. Better photo by Joe.

We never did find the Winter Wren. It amazes me that a some out-of-range blackbirds and wrens all found their way to a spot in the Albuquerque bosque no more unique than any other part. I have a feeling that this area will get a lot more coverage by local birders over the next few months.