Every year in late summer two species of hummingbirds migrate south through New Mexico and join the common Black-chinned and Broad-tailed Hummingbirds (in the lowlands and mountains respectively). The Broad-taileds also head down slope after they finish breeding at higher elevations. The odd thing is that Rufous and Calliope Hummingbirds don’t migrate north through the state, instead taking a more westerly route through Arizona and California. Late July and August is the time for New Mexican birders to get their chance to see these two distinctive species.

I saw a few Rufous Hummingbirds last summer but kept missing the tiny Calliope Hummingbird, North America’s smallest bird species. I’d never seen one, in fact…until today! I promised myself that this summer I would park myself in front of a feeder at the nature center for as long as it took to see this life bird. I didn’t know it would take all of ten minuets or that I wouldn’t have to sort out a female Calliope from the more numerous female Broad-taileds. 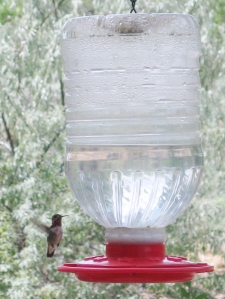 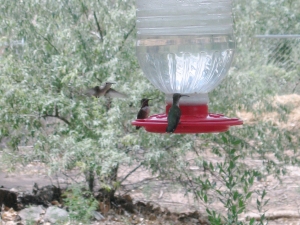 Melissa and I watched the little guy from about eight feet away or so and got great looks. The raspberry-colored streaks on his throat are individual feathers that stick out a little bit, giving the impression of droplets raining out from the bast of the bill. You can see that better in these photos: 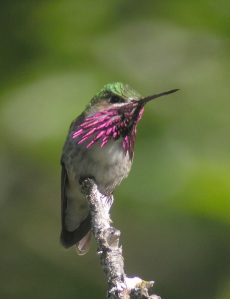 In addition the the lovely Calliope Hummingbird (US #545, NM #298, Bernalillo #220), we saw a few each of Broad-tailed and Rufous Hummingbirds, and dozens of Black-chinned Hummingbirds. Other birds were fairly quiet save for a vocal Summer Tanager and Ash-throated Flycatcher. I did notice a few early migrant Chipping Sparrows in the garden.

If you’re in New Mexico, check out those hummingbirds over the next month: you might see four different species.