On Saturday morning I joined a Portland Audubon bird walk at Powell Butte Nature Park, which as it turned out was not too far away from where Melissa and I were staying. I was excited to meet some local birders and hopefully get some tips on where to find certain species. Unfortunately, I forgot to get batteries for my camera, so this scenic photo will have to do. [Powell Butte with Mount Hood in the background; photo by K. Kendall used under CC BY 2.0]

The target bird species for the trip was Lazuli Buntings, and they did not disappoint. Males were singing all over the place and often chasing others away through the grass. The weather was warm, the sun bright, and I enjoyed seeing many species as I climbed the hill to catch up with the group. A few Anna’s Hummingbirds buzzed around and I soon spotted a few of their relatives and my second lifer of the trip: Vaux’s Swift. This species is very similar to Chimney Swift as you can see below. 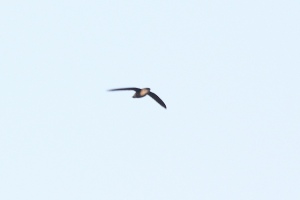 The birding group was huge: at least thirty people were strung out along the trail when I joined up with them. We watched some Savannah Sparrows sing in the grass and saw one pair copulating. An odd flycatcher song drifted up the slopes which sent the group into a bit of confusion. It took me a while to place it, as it’s one I rarely heard back east. A mild, good-natured debate sprung up about the singer: Olive-sided Flycatcher or Western Wood-Pewee? I knew it was the former, but iPods were brought out and the songs were played for all to hear. I eventually spotted the bird and pointed it out to the group leader who got a scope on it. The large head and robust body did indeed indicate an Olive-sided Flycatcher. I suspect the leader knew as well, but went through the exercise in identification for the benefit of the folks along on the trip.

Further along, we spotted a Red-breasted Sapsucker in a stand of aspens–another lifer for me!

A freelance writer was also along for the trip and taking notes to write an article for a blog about easily accessible nature excursions across the country. Her article has a few more photos.

I got some batteries and made may way through Portland to the Portland Audubon Sanctuary located in a forested ridge west of the city. Here I found a Red-breasted Sapsucker tending a nest with several noisy babies inside. Many Wilson’s Warblers were singing and I could hear a few Pacific Wrens which stayed well hidden. But I still wanted to see one. Many of the trails at the Audubon center are named after birds, though after not seeing any jays on the Jay Trail and no woodpeckers on the Woodpecker Trail, I didn’t have high hopes for the Wren Trail. I didn’t hear any singing, but some rustling among the ferns eventually revealed a tiny dark brown Pacific Wren! Another lifer! 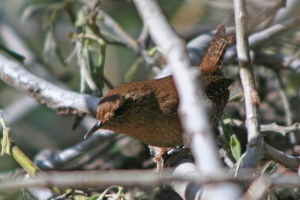 Pileated Woodpecker holes. Didn't see any of the birds.

The forests in Oregon are like nothing I’d ever seen. Ferns were everywhere and the conifers were immense. Photos can’t do the sheer amount of green biomass any justice. Easier to take in were the many wildflowers (identification of which is not my forte, but my mother might be able to tell me what they are!).

[Edit: Flower ID’s from my mom–thanks!] 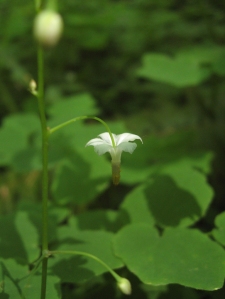 [herb-Robert or Robert geranium Geranium robertianum. Also known as death-come-quickly. What is up with plant names?] 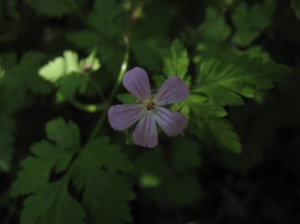 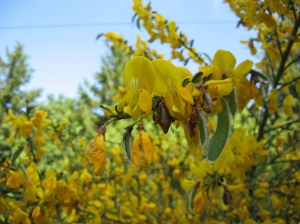 [orange honeysuckle Lonicera ciliosa. The two leaves just below the flowers fuse into a disc.] 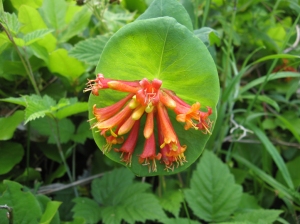 The ridge west of Portland is part of Forest Park, one of the largest urban forest preserves. I checked out a few access points just to do some local birding before meeting Melissa for dinner in the city. Fewer birds were here than at the Audubon sanctuary, but I did see a Barred Owl which may have flown in to my pygmy-owl imitation hoping for a meal. Soon after a Rufous Hummingbird began to harass the owl–those things are bold!

The skies were clear that Saturday and we had unusually good views of Mount Hood and Mount Saint Helens, the nearby stratovolcanos.

Next up, my trip to the Pacific!