In late June, Melissa had a scientific meeting in Portland, Oregon. I tagged along for some beer, birds, and to travel with her!

As we landed in Portland, we were stunned with all the clouds, the greenery, and the water. After a long, dry spring and summer in Albuquerque complete with multiple forest fires, the Pacific Northwest was a nice break. Mount Saint Helens and Mount Rainier (photo at left) poked above the clouds.

We stayed with another UNM student at her mother’s place east of the city in Gresham. The meeting didn’t start until Friday evening, so Melissa and I drove east through the Columbia Rive Gorge to check out a few waterfalls. We stopped at three places: Crown Point overlook, Latourell Falls, and Multnomah Falls. Our rental car was not very nice; don’t ever get a Chevy HHR because the windows are too small and it has weird blind spots. 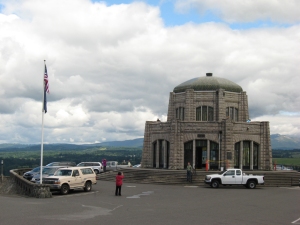 Crown Point provides a great view up and down the Columbia River Gorge. 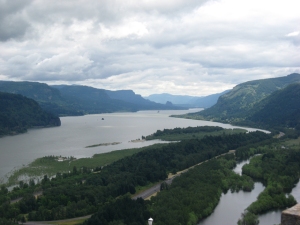 Melissa and I aren’t ones to stop at every scenic overlook or spot along a drive, but we pulled off at the first waterfalls, Latourell Falls. I think I glimpsed the falls as we drove past and it looked nice.

Recent uplift of the area and erosion by the massive Columbia River have formed the large number of waterfalls along the gorge. At Latourell Falls, you can see a thick basalt flow with hexagonal-shaped structures that formed when the lava cooled and hardened. Few birds were around except the Pacific Wren singling loudly along the stream below the falls. Since this would be a life bird, I wanted to see it before I counted it on my list. We also found a cool millipede. 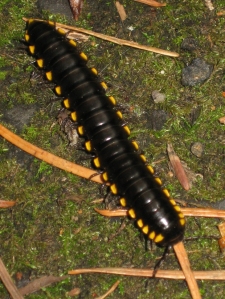 Multnomah Falls is a very scenic spot and the second-tallest continuous-flowing waterfall in the US. Visitors can view the falls from three spots: at the base, from a bridge between the two portions of the falls, and all the way at the top. Melissa and I made the trek to the top of the falls and it was well worth it. The bridge gets a lot of spray from the tall upper falls and I can imagine it gets very icy in the winter. Unfortunately, we didn’t see and American Dippers, but other birds were around. Oregon Juncos flitted around the visitor center, Ospreys were calling from a nest along the river, and some Wilson’s and Orange-crowned Warblers called from the bushes. We spotted a few Chestnut-backed Chickadees which I haven’t seen since 2006 in Washington. Near the top of the falls, I heard the first of many, many Swainson’s Thrushes that I would encounter on my visit. The best bird, though, was a totally unexpected Hermit Warbler I saw on the way back down. My first lifer of the trip, #539 in the US! I’m glad I did see it, because in the next 4 days in Oregon I didn’t see any others.

Hermit Warbler in coastal Oregon. Photo from flickr from Frode Jacobson. Used under CC BY 2.0

Even better than any of the birds, though, was a cute pika that crouched on top of a mossy rock in a rock talus slope. These are adorable little mammals. Melissa had never seen one before and was so excited. Other scientists at the mammal meeting were jealous of our sighting. David Attenborough has a great video of pikas frolicking through rocks and gathering hay (at YouTube). 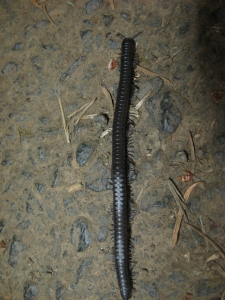 A longer millipede at Multnomah Falls 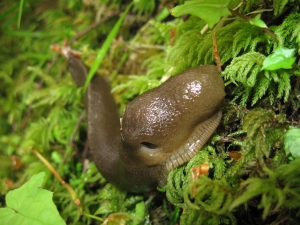 That evening, we heading into Portland so Melissa and our friend could check-in to the meeting and we found some foraminifera sculptures near the campus.