Last week, the Thursday birders were bound for Bosque del Apache National Wildlife Refuge. My friend Gary was still set on seeing one of the Aplomado Falcons that can be seen at the refuge and, since early morning seems to be the best time, we left Albuquerque early in an attempt to find one. On the way down NM-1, we found an odd looking hawk which was too far away to get a good look at. It had a white upper tail and all dark plumage, which normally means a small number of hawks, none of which are expected in central New Mexico especially in winter. This hawk will likely remain a mystery. 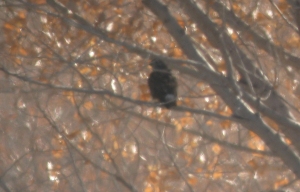 What is this hawk?

The Aplomado Falcons often hunt along the John Taylor Memorial Trail along the Marsh Loop. Gary and I got there but, once again, found no falcon. A couple of Bald Eagles flew around the fields as well as a large number of Northern Harriers. Some of these birds looked a lot like Aplomados, with long tails.

After dipping yet again on the Aplomado Falcon, we made our way to the visitor center to meet up with the CNMAS Thursday birder group. On the way, we saw a very dark hark fly from a tree and right over our car; the quick look we had was too poor to tell what it was. At the visitor center, we found the group hadn’t arrived yet, but S was there (she found the Pomarine Jaeger with me, Gary, and another birder at Las Vegas NWR about a month ago) as well as some other central NM birders. We had a little discussion about the identity of a small raptor perched in a tall cottonwood. The staff inside said Cooper’s Hawk, others said Sharp-shinned Hawk, but from the views I had and the picture one visitor showed me, it was definitely an immature Merlin. Better views not obscured by branches confirmed this. Soon an American Crow flew in beside the Merlin, began to peck at a branch, eat something, and then begin to harass the small falcon. The sounds the crow was making caused us to think it was a raven, and the size of the raven made us think Chihuahuan Raven. After the crow chased the Merlin away, it returned and began to call like a normal American Crow. Who knew crows could be so tough to identify?

The Merlin and the crow

Once the group showed up, they started on their lunches while I wandered around the desert garden finding Gambel’s Quail, a Verdin, and a Pyrrhuloxia. I went in the visitor center to find the White-throated Sparrow (NM bird 242 and Socorro bird 123) that had been hanging around the feeders.

The group started down the Marsh Loop and stopped fir view a young Bald Eagle (left). While they tried to get a closer look, I investigated the sparrows flitting around the reeds next to the parking area. One was a nice-looking Lincoln’s Sparrow (Socorro bird 125), another was a Song Sparrow, and a few Marsh Wrens called from the denser parts of the reeds. Gary and I got good looks at a Marsh Wren a little farther down the road. At the boardwalk pond, we saw many Common Mergansers (Socorro bird 126) and a few Hooded Mergansers (Socorro bird 127) swimming near the pond edges.

At the end of the Marsh Loop, we noticed a hawk very far away perched on a twig at the top of a small tree. It looked interesting: not perched like a Red-tailed, dark “vest”, and what looked like a long tail. We were so far away that we couldn’t see it very well, so Gary and another birder walked down the roped off road to get closer. We were all very excited about this bird and had convinced ourselves that this actually might be an Aplomado Falcon. Not soon after, we who remained behind determined it was just a Red-tailed Hawk. Oh well. By this time, a lot of us had fallen behind the rest of the group. 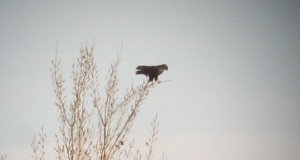 After the mass hysteria wore off, Gary and I slowly drove the rest of the Marsh loop. We were tired and trailing the group, so we weren’t looking too hard. I saw one hawk at the far treeline on the east side of the loop looked odd: an odd shape and too dark to be anything common. We almost passed it up, but figured it was worth a quick look. I’m

glad we did. The bird was an adult male dark phase Rough-legged Hawk (NM bird 243, Socorro bird 127). Dark phase birds make up 10% of the western population of Rough-legs, but New Mexico is in a funny spot that’s not quite east or west. Regardless, this was the first dark phase that either Gary or I had seen. We viewed the bird for a while, too long, perhaps. Eventually one of the leaders called over the radio that we should hurry it up—her car wanted to leave and she needed our radio back! 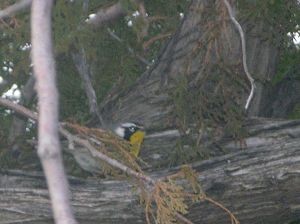 As Gary and I drove into San Antonio, we noticed a guy with binoculars and a camera looking intently into trees. Gary made a U-turn and we asked him what he was looking for. Yellow-throated Warbler (NM bird 244, Socorro bird 128), he responded. Uh… you mean Yellow-rumped? We had our doubts, but as we got out, the guy mentioned that S had called him earlier today when she found it after leaving us at Bosque del Apache! Just then, Melissa called to see where I was and to tell me she hurt herself earlier in the day and was taking it easy. I was very concerned, but at the same time, the warbler started chipping and flitting about. Would the bird stay put long enough to make sure my sweetie was ok and get the bird? Turns out yes, but I quickly made sure she was ok and then promised I’d call back soon.

Bad photo by me

Yellow-throated Warblers come in two types: ones with yellow supralorals (in front and just above the eyes) and ones with white supralorals. Of course, it isn’t that easy: some of each group show the other group’s characteristic color. Yellow birds breed in the southeastern US, in Florida, Georgia, the Carolinas, and eastern Virginia and Maryland. White birds breed in the interior Southeast, west to Texas and north to Pennsylvania. Based on range, the southwestern vagrants should be white-lored, and despite the yellow color on this birds lores, I think we were looking at the expected white-lored subspecies. Yellow-lored species seem to have a longer bill, which this bird did not.

The owner of the house the warbler was in came out to the road to see what all the excitement was. Thankfully he was friendly and even enjoyed looking though Jim’s binoculars at the tiny colorful warbler. We told him he’d probably have some more visitors over the next few days, but he didn’t mind a bit.

After the Yellow-throated Warbler surprise, I suggested we check Turtle Bay Park in Socorro, near the NM Tech campus. We didn’t find anything rare, but at least two Myrtle Yellow-rumped Warblers were a nice find and new for me in the state. Chip calls of Myrtle Warblers are subtly but noticeably different from those of Audubon’s Warblers. One White-throated Sparrow popped up along a hedgerow among numerous White-crowned Sparrows. I was certain I heard one call of a Gray Catbird, but couldn’t pull one out of the dense branches. Next time.