Melissa and I got outside a little this afternoon but we should have gone earlier before the wind picked up. Our mouths still have some dust and silt from the dirt roads at Los Poblanos Open Space.

The flock of Sandhill Cranes I saw last week was still there although not as close to the roads. The flock was compressed in a small space, feeding in the harvested cornrows rather than spread out over the entire area. 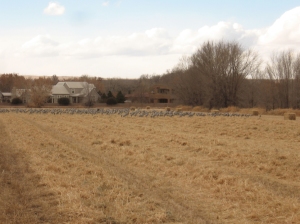 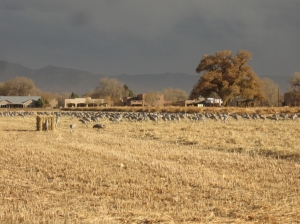 A surprise today was the number of geese present in the fields. Cackling Geese dominated and I suspect that these are the same Cackling Geese that spend time at the Rio Grande Nature Center’s Candalaria Wetlands. I noticed about five Cackling Geese with distinct white collars between the black of their heads and the gray-brown of their breasts. This mark is characteristic of some subspecies of Cackling Goose but not any that winter in New Mexico, as far as I know. 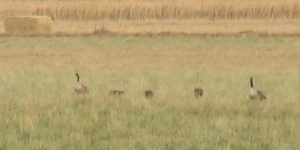 A goose flock farther along on our walk contained three Snow Geese (Bernalillo bird 168), two adults and a juvenile.

ducks. The afternoon sun combined with some storm clouds over the Sandias made for nice light on the ponds. Northern Pintails, Mallards, Gadwall, Hooded Mergansers, Northern Shovelers, Canvasback, Ring-necked Ducks, and Lesser Scaup all swam, fed, or slept at the pond by the parking lot. I thought I had seen a Greater Scaup last week, but toady after seeing multiple male Scaup with rounded, greenish colored heads I’m not so sure. One of the Mallards had at least some Mexican Duck genes in it.

This Canvasback flew in after Melissa went to get warm in the visitor center :(

The pond behind the visitor center had a large number of Wood Ducks this afternoon and some Northern Shovelers very close to the observation room.

This entry was posted in Albuquerque birding. Bookmark the permalink.