After I dropped Melissa off at school, I drove up to the Corrales bosque preserve just north of the city. Over the weekend, a pair of local birders had heard both a Winter Wren and a Pacific Wren, recently split from the former. Both of these birds are unusual but regular in New Mexico and separating the two will now be an interesting challenge to the state’s birders.

Sadly, the day was far too windy for any birds to be moving around let alone making it easy to hear any calling. The only birds I saw before giving up were an Audubon’s Yellow-rumped Warbler and a Spotted Towhee.

I made my way back into Albuquerque and home by way of the Alameda Bridge and the Rio Grande Nature Center. As I crossed over the river, I noticed something large and white among the Canada Geese. Thinking it was a swan, I pulled in the parking lot and walked over the pedestrian path paralleling the road. No swan–it was some large oversized novelty soccer ball.

On the way back to my car, I found a mantis being swarmed by ants and obviously not doing well. The mantis may have been injured or cold and the ants probably wasted no time in descending on a huge meal. I sent the picture to What’s That Bug, were the Bugman suggested the ants may have been invasive species and that the mantis was probably either a California Mantis or more likely an Arizona Mantis; both of these species are native mantises.

The nature center was just down the road, so I stopped in to see what was on the pond. The usual species were present: Canada and Cackling Geese, Green-winged Teal, Ring-necked Ducks, American Wigeons, and one of the lingering Snowy Egrets. 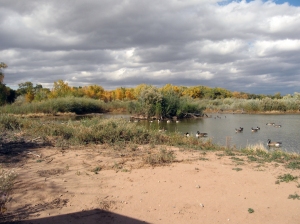 Golden cottonwoods behind the pond

I was able to get some digiscoped pictures of the Cackling and Canada Geese, showing the difference in head and neck structure as well as bill size. The Cackling is essentially a miniature version of a Canada Goose, much like the Ross’s Goose and Snow Geese–see yesterday’s post. At The Drinking Bird, Nate poetically described Cackling Geese today as “the bastard spawn of [Canada Geese and Mallards], all the markings of the Canadas but rivaling the Mallards for size.” While the subspecies of Cackling Geese we get here in New Mexico (probably mostly Richardson’s Cackling Geese) run a good five inches longer than Mallards and are noticeably bulkier, the Cackling Cackling Goose really does look like a Mallard sized Canada Goose. Someone really needs to find a better name for that last subspecies! 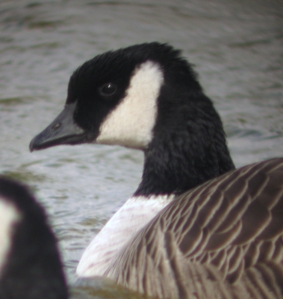 Cackling and Canada Geese show much variation among numerous subspecies. One of the variable characters is the breast color. Here one of the Cackling Geese has a much brownish, almost iridescent color to its breast than the other three with clean white breasts.

[Nate’s post on the Cackling Goose comes from his series of posts telling the stories of each of his life birds. These posts inspired me to recount my efforts to build up my Centre County, PA list and at some point in the future, I’ll tackle the same project for my life list. That is, if I can figure out exactly when and where I saw the first 150 or so birds…some I know for sure, but others are lost to hazy memories, lazy record keeping, and maybe some lost field guides with cryptic dates in the index!]