On Sunday afternoon, Mel and I went down to Socorro, NM to visit some friends who had moved to New Mexico around the time we did. They’d come up to Albuquerque a few times but this was the first time that we’d visited them at their new home. From their description, the house sounded really nice: on a large piece of property with one other house, a pond just off the back porch, and an owl nest that sometimes can be seen over a webcam!

Their house was even nicer than it sounded, especially regarding birds. The pond out back is surrounded by tall cottonwoods and the water is full of cattails. Just in the short time we walked around outside, I noticed two American Coots, Red-winged Blackbirds, a House Wren, a Black Pheobe, and a Belted Kingfisher.

In addition, the property sits very close to a big migrant trap in Socorro County which has a very similar pond and vegetation setting. I wonder what my friends might get in their yard!

Part of the plans for the day was to drive down to Bosque del Apache just before sunset to look for cranes. Melissa certainly hadn’t seen any cranes satisfactorily yet and our friends hadn’t seen any at all. We found several dozen Sandhill Cranes along NM 1 just north of the refuge. Although the sun was setting behind them, we still got some great looks. 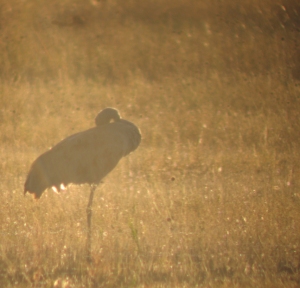 At the refuge itself, we drove up to the Flight Deck, one of the popular spots to view cranes flying out in the morning and in at sunset. By this point, the sun had set behind some mountains to the west, so the light wasn’t great. A few cranes were feeding a couple hundred yards away and soon more flocks came flying in from the north or northeast. We enjoyed hearing their calls even though mosquitoes soon became a nuisance. 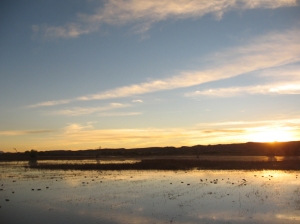 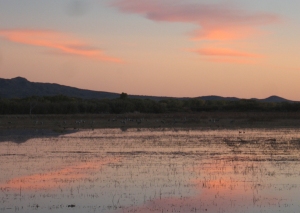 In addition to the cranes, at least a thousand Northern Pintails fed in the flooded field with smaller numbers of other dabbling ducks mixed in. As the sun set, portions of the duck flocks would take off and fly to the south; they perhaps knew of a better roosting spot for the night. 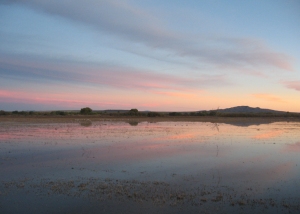 Flock of Snow and Ross's Geese off the Flight Deck, Bosque del Apache

The birds that got me most excited, however, were the small flock of white geese visible from the deck. Most of them were Snow Geese (NM bird 218, and Socorro bird 100!) but I began to look through them for the less common, but still regularly occurring, Ross’s Goose. The latter species is rare in the east and is generally hidden within flocks of tens of thousands of the former during the winter, making for some long, freezing, and extremely frustrating hours if you want to find one. The only Ross’s Goose on my life list is one from November of 1992 (just a year after I started birding) at Blackwater NWR when another birder helpfully gave me a look at it in his scope. As I think back, I recall a large flock of Snow Geese taking off, leaving one white goose in the water; this unknown birder said the lonely goose was the Ross’s. Birders are generally a trustworthy group, but was he pulling my leg? Was I, at 11 years old, too eager to see a life bird and willing to take the word of anyone who would confirm this?

Perhaps. But on Sunday, I saw the first Ross’s Geese (NM bird 219 and Socorro bird 101) that I had found on my own! It was hard in the fading light and with the observation deck shaking with each step of the other crane admires around me, but I found four or five geese distinctly smaller than the Snow Geese and with stubbier bills lacking the black patch characteristic of that species.

Adult and immature Snow Goose in British Columbia by mlamberson. Photo at http://www.flickr.com/photos/vitrain/4047110825/

Ross's Goose in Illinois. Note the smaller bill with bluish warty base. Photo by Jason Weckstein at http://www.flickr.com/photos/jweckstein/2316022108/

Many of the birds I have seen in New Mexico over the past months have been “second lifers”, ones I haven’t seen in 14 or 15 years. The Ross’s Goose, however, has been the best so far, going back 18 years and being the first time I could recognize the species for myself. Melissa and our friends shared in my excitement as much as they could; this was one of those personal birding victories that long-time birders can immediately recognize.

According to eBird, these were the first Ross’s Geese reported this fall in state!