The Central New Mexico Audubon Thursday birder trip today traveled north to Santa Fe to visit the Randall Davey Audubon Center and Sanctuary. Davey was an artist who built a house in an old sawmill in the eastern portion of Santa Fe Canyon on the east side of the city. I’m unsure of how the Audubon Society acquired the property, but the gardens and adjacent hillslopes make for some excellent northern New Mexico mountain birding easily accessible from Albuquerque.

The weather looked very iffy for the trip. Storms were forecast, and for most of the day, clouds kept the day dreary. 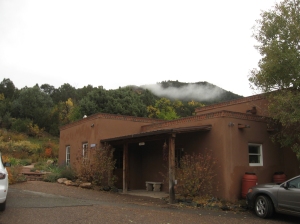 In Santa Fe Canyon, where the mid morning was dreary and cloudy. 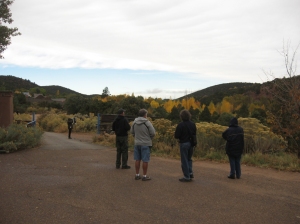 Some of the group looking at towhees and a Curve-billed Thrasher. Gary (from PA) still wears shorts in the cold! 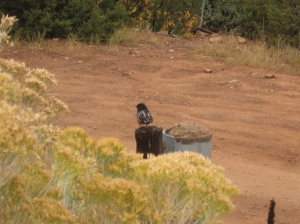 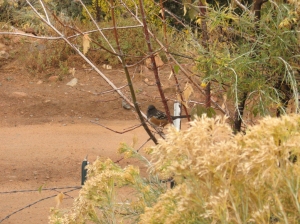 Despite some confusion over the provided directions, all four cars eventually made it to the center. We had great birding from the parking lot with views of Black-billed Magpies, Western Scrub-Jays, Cassin’s Finch, Spotted and Canyon Towhees, and the first few of about a dozen Townsend’s Solitaires for the day. Rufous and Broad-tailed Hummingbirds lingered at the center’s hummingbird feeders. Pine Siskins fed on some thistle feeders in a cute enclosed garden just off the Davey house. 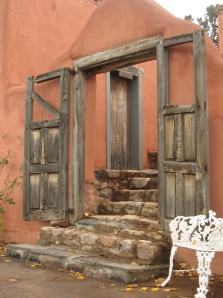 Courtyard door at the Davey House

Lefty, the trip leader for the day, led us up an almost non-existent trail which eventually joined the main trail up the hillslope from the center’s main buildings. At this point, the clouds began to clear up and the sun was a welcome sight. We found more Townsend’s Solitaires and first heard a huge flock of Pinyon Jays. I spotted them flying down the canyon closer to the parking lot where we could have had great looks. A few perched long enough to get them in the scope, but few of us got good looks at any. I had a hard time describing where the flock was and they soon flew out of sight behind a ridge. 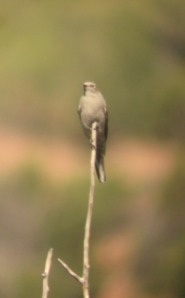 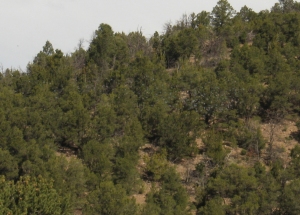 A few flyover Clark’s Nutcrackers kept us satisfied for a while, however. Two Sharp-shinned Hawks soared by and circled up on thermals rising from the canyon’s sides. The jays began to call again and the whole flock of at least 120 flew closer to us, though they were still about half a mile away. I think we all managed to get decent looks at them. Pinyon Jays are present in the area all year long, but the large flocks are highly nomadic and found unpredictably.

On a birding trip with my parents in Utah many years ago, Pinyon Jays were one of my top wanted birds to see. Blue Jays got me into birding and I’ve always enjoyed the more colorful members of the crow family despite their aggressive behavior towards other birds and especially towards eggs and nestlings. On the last day, we finally saw a huge flock (at a bit of a distance) that appeared out of nowhere, milled about for a few minutes, and then as quickly flew on and out of sight. Such is the way Pinyon Jay sightings often go. 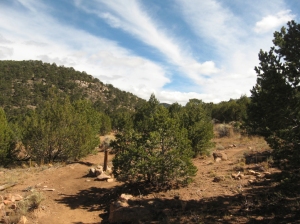 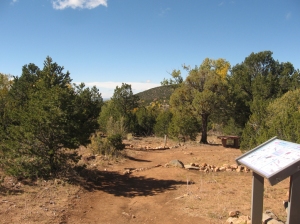 Along the trail on the upper canyon slopes

Back at the parking lot, some of our group left for lunch in Santa Fe, but most of us brought lunch and sat in a small amphitheater to look for birds as we ate. A Steller’s Jay flew down the canyon while a small flock of Evening Grosbeaks flew overhead, calling.

This short trip brought my Santa Fe County total up to 30 species, so there is a lot more for me for find and explore in this area in the future.