Posted on October 18, 2010 by Matt
Some of the Centre County birds I needed to see to reach 200 I had already found just outside the county. Along Troy Hill Road in Clearfield County, Vesper Sparrows and other grassland birds were pretty easy to find. And I suppose at the right place and time, they are just as easy to spot in Centre County. But as of last year, Vesper Sparrow had eluded me.
I can’t recall if I was specifically looking for Vespers early in April but I stopped to check for shorebirds at a small flooded portion of a field along Nixon Road. A light colored bulky sparrow caught my eye but flushed when I got out of the car to get a better look. White outer tail feathers made me think it was a Vesper Sparrow which I confirmed when I got it in the scope further down the field. The sparrow even sang a few times; I don’t think I had heard one before. 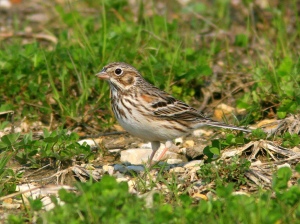 Vesper Sparrow in Illinois. Photo by Ken Schneider. Ken hosts the Sandia Rosy-Finch website (www.rosyfinch.com) and blog though he and his wife have retired to Florida.

I spent the rest of the afternoon checking some local ponds and lakes but found no ducks besides Mallards!

This entry was posted in State College birding. Bookmark the permalink.