I’m currently earning some money by helping with bird surveys along the Rio Grande.  SunZia, an energy initiative company, will be constructing a high voltage transmission line through New Mexico and Arizona to better access high-yield solar and wind energy producing areas (pdf). One problem, though, is the route cuts across a major migration path for cranes and geese which can collide with wires. For the past year, UNM students have been conducting bird surveys at a number of potential sites where the power lines will cross over the Rio Grande. My first location was with a grad student, Libby, south of San Antonio, NM.

These surveys run for four hours; the morning survey starts one hour before sunrise and the afternoon survey ends one hour after sundown. Libby picked me up at 4:45 so we could make the hour and fifteen minute drive in time, but we got there a little late. The eastern skies were a bit light and Great Horned Owls (Socorro county bird #79) were already calling to each other.

The morning survey went quickly at first, but the last half dragged a bit after bird activity died down a bit. A few Sandhill Cranes flew south along with a small flock of White-faced Ibis. Songbirds flying back and forth kept us occupied, including Lark Sparrow, Wilson’s Warbler (Socorro bird #80), Spotted Towhee (Socorro bird #81), and Blue Grosbeak. Other new county birds were Yellow-headed Blackbird, Yellow-rumped Warbler, Brewer’s Blackbird, White-breasted Nuthatch, and Western Scrub-Jay.

Our task was to record when birds passed through an east-west plane and measure the direction of flight, the distance to the bird, the angle of observation relative to the ground, and the compass bearing. These data allow the flight path of the bird to be calculated and plotted, theoretically informing SunZia of potential bird mortality risks.

After a nap and our bagged lunches, we headed into town to get some ice cream and then hightailed it down to Bosque del Apache National Wildlife Refuge for a little free time birding before the next survey. A quick stroll through the desert garden turned up few birds in the heat of the day, but Libby spotted a Verdin (New Mexico bird #199 and Socorro bird #87). This little bird is a relative of chickadees an titmice and is the only member of its family in the Western Hemisphere. We also found a House Wren (Socorro bird #88). 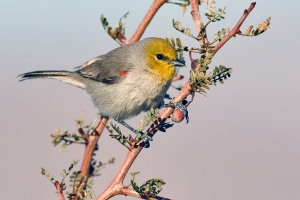 We had time for a quick tour around the Marsh Loop, first stopping at a large permanent pond. Nothing too exciting, but it held rafts of Ruddy and Ring-necked Ducks as well as a number of cormorants which we had trouble identifying. Almost all of them were certainly Double-crested (Socorro #89) and not Neotropic Cormorants, a species that has been expanding its range in the southwest. A Merlin (NM bird #200, Socorro bird #90) flew overhead and perched facing away from us making the identification tough. Later on the loop we spied an American White Pelican (NM #201, Socorro #91) swimming in a reedy pond. Other new Socorro birds were Great Blue Heron, American Avocet, Long-billed Dowitcher, and American Pipit (#92-95).

The afternoon survey started with some interesting birds: a Peregrine Falcon (Socorro #96) dove under the powerlines and back up, giving us great views as it flew south. A Golden Eagle (Socorro #97) flew southwest from some spot in the mountains to the west as was in view for a few minutes. A European Starling was interesting only because it was Socorro county bird #98 (got to record it sometime). The weather then began to deteriorate and storms started moving towards us. 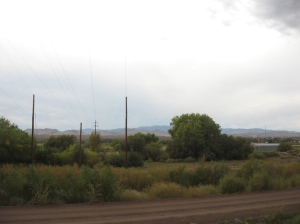 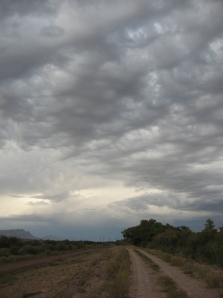 Weird looking clouds above us. I thought they looked like fungal hyphae. Libby thought I was weird.

About sunset, the storm was very close and lightning flashed directly overhead…above the powerlines we were standing beneath. This freaked us out, to put it mildly, and we decided our safety was much more important than the very few birds we would record as it got darker. It rained all the way home, but I was glad to get home a little earlier than I planned.

This entry was posted in Albuquerque birding. Bookmark the permalink.